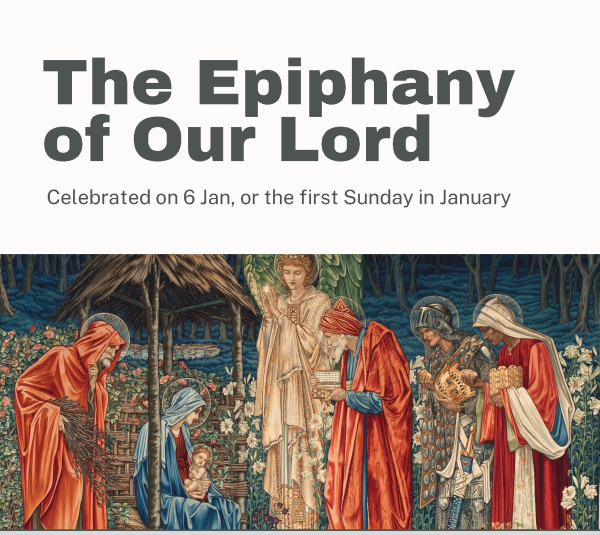 WHAT IS IT?
An “epiphany” refers to a revelation, and the season marks the shift in emphasis from the birth of Jesus to the revelation of his ministry to the world. Epiphany brings together the three strands of Jesus’ birth (the adoration of the wise men), baptism (at the Jordan), and ministry(turning purification water into wine at the wedding at Cana).

WHY DO WE CELEBRATE IT?
Epiphany is about God making all things new. We celebrate that the Gospel is not just for Israel but all the world. We remember that as the new people of God we share in the one baptism of Jesus. We rejoice that God is doing a new work through fulfilling the old covenant.

WHY THE WISE MEN (MAGI)?
The wise men represent the world coming to worship at the feet of Jesus. Scripture is silent as to their actual number, but the three gifts gave rise to the tradition that they were three.

WHAT DO WE DO?
Traditionally, the Sunday following Epiphany Day celebrates the baptism of Jesus. Readings in the weeks after Epiphany emphasise the ministry of Jesus, including the wedding at Cana.

White is used as a symbol of joy.

Some churches conduct baptisms or renew their baptismal vows

THE FIRST CHRISTMAS
Epiphany was observed even before Christmas! For Early Christians Jesus’ birth was not as important as his death, and Easter served asthe primary celebration of the Church. Epiphany was a summary of the beginning of the Gospel story. It was only later, amidst debates on the divinity and humanity of Jesus, that Christmas began to be celebrated.